Cranston Engineering Group proudly celebrates a moment in Cranston history by taking a look at the Augusta River Walk and River Walk extension. This project is one of the most iconic in the Cranston portfolio.

Cranston, then known as Cranston, Robertson, and Whitehurst, was the prime engineer and planner for this award-winning waterfront park in downtown Augusta. The River Walk stretches 3/4 of a mile along the Savannah River, integrating walkways along two parallel levels – on the bank of the river and on top of the levee. The park includes four sheetpile bulkhead docks totaling 700 feet in length; a 1,433 seat open-air amphitheater; two closeable breaches in the levee; a playground, sitting and recreational area; interpretive signage; and associated landscaping and lighting.

It is particularly unique as the only known waterfront development in which a flood control levee has been overcome as a visual barrier and incorporated into the design in an aesthetically pleasing manner while preserving its flood control function.

The River Walk served as a kay element in the downtown revitalization strategy develop by a public-private efforts, Augusta Tomorrow, Inc., to attract new development along the underutilized frontage of the Savannah River and has generated over $200 million in related private investment. The $18.14 million linear park has attracted hotel, office, museum, retail, and residential development and has been widely recognized at state and international levels for its engineering, planning, and design excellence. Construction was completed for this project in 1993.

RIVER WALK EXTENSION:
In 2018 and in conjunction with the Nathan Deal Georgia Cyber Innovation Training Campus, Cranston provided design services, permitting, and construction administration for the extension of the River Walk from 11th Street to 13th Street, including bridge structures from the Cyber Center buildings. 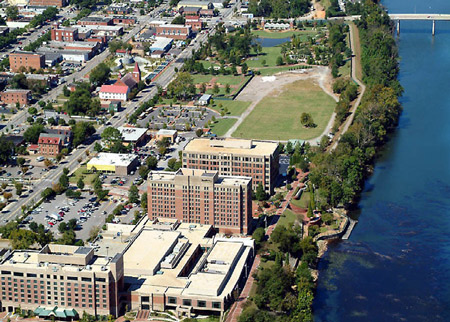